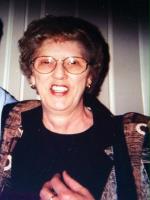 Annette Childress Tharpe, 74, of Chase City, Virginia passed away on September 19, 2013. She was born on May 29, 1939 in Cleveland County, North Carolina to the late Charlie Roy and Bertha Blanton Childress. She is survived by her husband, Franklin Ray Tharpe of Chase City, VA; two sons, Marty Lewis and his wife, Debbie of Chase City, VA and Greg Lewis and his wife, Debbie of Red Oak, VA; a step-son, Kevin Tharpe of Tennessee; a step-daughter, Cheslie Tharpe of Tennessee; her grandchildren, Angela Lewis, Robert Lewis, Courtney Lewis, Emily Lewis, and Marc Lewis; three great-grandchildren; and numerous nieces and nephews. She is predeceased by her sister, Jean Hoyle. Mrs. Tharpe was a member of Black Branch Baptist Church and a retired clerk for the Town of Chase City. Funeral services will be held on Saturday, September 21, 2013 at 2 p.m. at Newcomb Allgood Funeral Home. Interment will follow at Woodland Cemetery. Visitation will begin one hour prior to the service. In lieu of flowers, memorial contributions may be made to the Chase City Fire and Rescue. Online condolences may be expressed at www.newcomballgoodfh.com.

To order memorial trees or send flowers to the family in memory of Annette Tharpe, please visit our flower store.