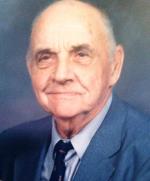 Harold Riggins Carter, 89, of Chase City, VA passed away on November 1, 2013. He was born on January 30, 1924 to the late Willie and Fannie Carter. He is predeceased by his wife of 69 years, Hazel Harris Carter and his son, Harold R. Carter, Jr. He is survived by his son, William “Randy” Carter and his wife, Carolyn of South Hill, VA, three daughters, Bonnie Kaplan and her husband, Emil of Wake Forest, NC, Mary Etta Dickenson and her husband, Brent of Chase City, VA, and Diane Tyree and her husband, Charlie of Roanoke, VA, nine grandchildren, sixteen great-grandchildren, one sister, Mabry Wells of South Hill, and numerous nieces and nephews. Visitation will be held on Monday, November 4, 2013 from 7 until 8:30 p.m. at Newcomb Allgood Funeral Home. Funeral services with military honors will be held on Tuesday, November 5, 2013 at 11 a.m. at Ebenezer Baptist Church. Interment will follow at the church cemetery. In lieu of flowers, memorial contributions may be made to the Chase City Volunteer Rescue Squad. Online condolences may be expressed at www.newcomballgoodfh.com. Newcomb Allgood Funeral Home in charge of arrangements.

To order memorial trees or send flowers to the family in memory of Harold Carter, please visit our flower store.