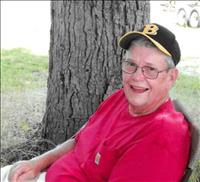 Emmett Gray Tuck, 72, of Chase City, Virginia passed away on March 13, 2014. He was born on August 10, 1941 in Halifax County to the late Donald Hewell Tuck, Sr. and the late Edna Clark Tuck. He is survived by his wife, Frances Thompson Tuck, one daughter, Carole Tuck Newcomb and her husband Steve of Chase City, VA, two grandchildren, James Hatcher and his wife Brook of Clarksville, VA and Hayley Newcomb of Chase City, VA and one great-granddaughter, Aliza Hatcher. He is also survived by his sisters, Evelyn Tuck Harding and Marjorie Tuck Paynter and his brothers, Alvin Tuck and James Tuck all of Lunenburg County, VA, numerous nieces and nephews and many devoted friends. He is predeceased by one brother, Donald Hewell Tuck, Jr. Emmett retired from the Virginia Department of Corrections. He was a member of Oak Hill Hunt Club and a past member of the Chase City Volunteer Fire Department. Visitation will be held on Friday, March 14, 2014 from 7 until 8:30 p.m. at Newcomb Allgood Funeral Home. Funeral services will be held on Saturday, March 15, 2014 at 2 p.m. at the Newcomb Allgood Funeral Home chapel. Interment will follow at Woodland Cemetery. In lieu of flowers, memorial contributions may be made to the Bluestone Athletics. Online condolences may be expressed at www.newcomballgoodfh.com.

To order memorial trees or send flowers to the family in memory of Emmett Tuck, please visit our flower store.