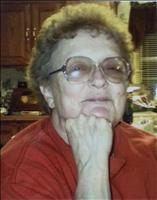 Anne Kate Keen Thornton, 75, of Chase City, Virginia passed away on Friday, January 16, 2015. She was born on July 14, 1939 in Danville, VA to the late Alvin Arthur Keen and the late Elva Turner Keen. Mrs. Thornton is survived by her daughters, Kathy Ann Thornton Graham and her husband Steven (Bo) of Myrtle Beach, SC, Marie Thornton Brown and her husband Michael of Clarksville, TN, Carolyn Thornton Weaver and her husband Creig of Woodlawn, TN, and Jody Thornton Andrews and her husband Carl of Chase City, VA, thirteen grandsons and seventeen great-grandchildren. She is also survived by her brother, James Howard Keen and his wife Sandra of Eden, NC, numerous nieces and nephews, her devoted friend Larry Maxted and many wonderful friends and neighbors. Anne is predeceased by her husband, W.R. “Bill” Thornton, one daughter, Mary Susan Thornton, one brother, Harold Keen, one sister, Ruby K. Smith, and her devoted friend, Bob Perry. Mrs. Thornton is a member of Concord Baptist Church. Visitation will be held on Saturday, January 17, 2015 from 7 until 8:30 p.m. at Newcomb Allgood Funeral Home. Funeral services will be held on Sunday, January 18, 2015 at 2 p.m. at Concord Baptist Church. Interment will follow in the church cemetery. In lieu of flowers, memorial contributions may be made to the COPD Foundation, 20 F Street NW, Suite 200A, Washington, DC 20001 or the Chase City Rescue Squad. Online condolences may be expressed at www.newcomballgoodfh.com. Newcomb Allgood Funeral Home is in charge of the arrangements.

To order memorial trees or send flowers to the family in memory of Anne Thornton, please visit our flower store.