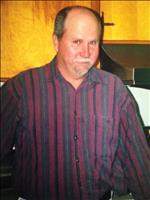 Robert Page Duffer, 59, of Red Oak, Virginia passed away on Monday, August 17, 2015. He was born on February 17, 1956 in Halifax County, Virginia to the late Willie Thomas Duffer and the late Hazel Marie Rutledge Crowe. Page is survived by his wife, Kathy Jones Duffer, four children, Autumn Duffer White and her husband William of Clover, April Duffer and her fiance' Brandon Emerson of Richmond, David Jones and his wife Sherri of Red Oak, and Christy Shook and her husband Keith of Keysville, and nine grandchildren, Austin, Taia, Courtney, Lyniah, Dustin Jones, Ashley Jones, Grayson Jones, Caleb Shook, and Carleigh Paige Shook. He is also survived by his brother, Roger Duffer of Red Oak, one niece, Sheree Flynn, sister-in-law, Debbie Duffer of Red Oak, brother-in-law, Edwin Nichols of Canada and many friends. Page was the President of Hills Creek Rifleman Hunting Club. Visitation will be held on Wednesday, August 19, 2015 from 7 until 8:30 p.m. at Newcomb Allgood Funeral Home. A graveside service will be held on Thursday, August 20, 2015 at 2 p.m. at Antioch Baptist Church Cemetery. In lieu of flowers, memorial contributions may be made to the Bacon District Fire Department or Wylliesburg Rescue Squad. Online condolences may be expressed at www.newcomballgoodfh.com. Newcomb Allgood Funeral Home is in charge of the arrangements.

To order memorial trees or send flowers to the family in memory of Page Duffer, please visit our flower store.