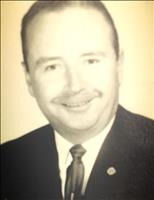 John Samuel Brankley, 96, of Chase City, Va., passed away peacefully at his residence on Monday evening, August 31, 2015.
Johnny was born on March 7, 1919 to the late John W. and Lemmie E. Brankley. He is survived by his wife of 69 years, Thelma Owen Brankley, and two daughters, Betsy Brankley Beam (George), of Forest, Va. and Kathy Brankley Klee (Buck), of Chester, Va. He was blessed with seven grandchildren, Ashleigh Beam Karol (Adam), Matthew Beam (Rebecca), Adam Beam (Hannah), Angie King Starnes (Joel), Eric Klee, Brandon Klee (Toni), and Kaleigh Klee, and nine great-grandchildren.
Mr. Brankley was a very proud WWII Army Veteran and was one of the last surviving members of the 29th division, Company E. He proudly served as one of the past post commanders of his local VFW.
He retired as a salesman with the W.T. Rawleigh Co., after 50 + years of service.
He was a member of First Baptist Church in Chase City where his Celebration of Life Service will be held on Friday, September 4, 2015 at 2 p.m. Interment will follow at Woodland Cemetery with full military honors by American Legion Post 43. The family will receive friends one hour prior to the service and afterwards at a reception in the church fellowship hall.
Memorial contributions may be made to the Chase City Rescue Squad, Chase City Fire Department, or the D-Day Memorial, in Bedford, Va.
Online condolences may be expressed at www.newcomballgoodfh.com. Newcomb Allgood Funeral Home is in charge of the arrangements.

To order memorial trees or send flowers to the family in memory of John Brankley, please visit our flower store.