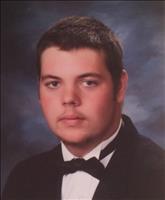 Kenneth Ray Shores, age 24, of Chase City, Virginia, passed away on Sunday, February 21, 2016. He was born on October 13, 1991 in South Boston, Virginia. Kenneth is survived by his father, Anthony Ray Shores, his mother, Brenda Lee Stallings Shores, one sister, Jenny Nicole Shores, and a nephew on the way that will be named Hunter Ray. He is also survived by his cousins, Clint Shores, Rodney Hall, and Derek Grady all of Chase City and Amber Jiggetts, Victoria Smith, Cody Renn, Ike Renn, and Averi Renn all of Henderson, NC, three aunts, an uncle, and numerous friends. He was an employee of Lewis Tree Service. A memorial service will be held on Saturday, February 27, 2016 at 2 p.m. at the Newcomb Allgood Funeral Home Chapel. Visitation will begin one hour prior to the service. Online condolences may be expressed at www.newcomballgoodfh.com. Newcomb Allgood Funeral Home in Chase City is in charge of the arrangements.

To order memorial trees or send flowers to the family in memory of Kenneth Shores, please visit our flower store.