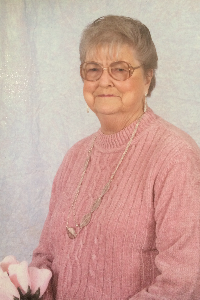 Mary White Edmonds, age 80, of Chase City, Virginia passed away on Saturday, May 21, 2016. She was born on August 4, 1935 in Chase City to the late Roy E. White and the late Georgia Willis White. Mary is survived by her daughter, Debbie Byrd and her husband Calvin, two sons, Duke Edmonds and his wife Glenda and David Edmonds all of Chase City, VA and two grandchildren, Michael Brown of Chase City and Jessica Edmonds of Victoria. She is also survived by two nieces and her devoted friends, Betty Claiborne, Frances Tuck, and Geraldine Hash. Mrs. Edmonds is predeceased by her husband, Ernest “Hoss” Edmonds and one sister, Frances Hall. She was a member of Bethel Baptist Church and retired from Russell Stover Candy Factory. Visitation will be held on Tuesday, May 24, 2016 from 7 until 8:30 p.m. at Newcomb Allgood Funeral Home. Funeral services will be held on Wednesday, May 25, 2016 at 2 p.m. at the Newcomb Allgood Funeral Home Chapel. Interment will follow at Woodland Cemetery. In lieu of flowers, please consider memorial contributions to the Chase City Rescue Squad, P.O. Box 81, Chase City, VA 23924. Online condolences may be expressed at www.newcomballgoodfh.com.

To order memorial trees or send flowers to the family in memory of Mary Edmonds, please visit our flower store.