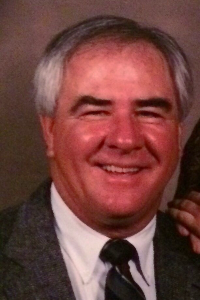 Thomas Baxter Huss, age 81, of Chase City, Va passed away on Wednesday, November 9, 2016 at Sentara Halifax Regional Hospital in South Boston, Va. He was born on May 16, 1935 in Mecklenburg County, Va and was the son of the late Alvin Lloyd Huss and Blanche Baxter Huss. Baxter is survived by his loving, devoted wife of 56 years, Edwina L. Huss, daughter, Karen H. Butler and husband, Jimmy, two granddaughters, Brynn and Brice Butler, many nieces, nephews, great-nieces, great-nephews, cousins, and friends. He is also survived by his brother-in-law and sister-in-law, Lacy and Charlotte Newcomb. He was predeceased by two brothers, Clyde Huss and Paul Huss and two sisters, Pauline Newcomb and Merle Johnson.
In his day, he was well known for his talent playing football and baseball. He graduated from Chase City High School in 1953 and attended Hargrave Military Academy in 1954. In his later years, he was an avid golfer and won many tournaments as an individual and in team play.
He served on the boards of Mecklenburg Country Club and Signet Bank, was a charter member of the Sertoma Club, a deacon and trustee of Concord Baptist Church and sang in the choir. He was the President and owner of Huss, Inc., a trucking company. Visitation was held at 11 a.m., Saturday, November 12, 2016 at Concord Baptist Church followed by the service at 12 p.m., with interment in the church cemetery.
In lieu of flowers, the family suggests memorial donations be made to Concord Baptist Church, 11650 Hwy 47, Chase City, Va 23924 or a charity of your choice. Online condolences may be expressed at www.newcomballgoodfh.com. Newcomb Allgood Funeral Home in Chase City is in charge of the arrangements.

To order memorial trees or send flowers to the family in memory of Thomas Baxter Huss, please visit our flower store.