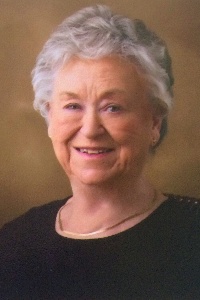 Reba Gryder Inge, dedicated wife and mother, died at the age of 91, on February 3, 2017.
She is survived by four children, Joseph and wife Linda Ruth, Harrison and wife Becky, Joyce Ellen, and Jeannie and husband James. She is also survived by six grandchildren, Joe, Amy, Edward, Andrew, Megan and Richard and ten great-grandchildren as well as four brothers, James, Ray, Norris and Floyd, and one sister, Annie. She is predeceased by her husband of 59 years, Richard M. Inge and her parents, Ruby and Vernon Gryder.

She spent her life in Mecklenburg County as a farm wife on a tobacco and cattle farm. Reba served 30 years on the Mecklenburg County Farm Bureau County Women’s Committee and 25 of those years were as Chairman from 1975 until 2000. She planned activities to promote agriculture and its importance. Some of her favorites were going to the local elementary schools and showing the children how from a seed you got a tomato plant and churning to show how butter was made. The Women’s Committee was active in a variety of activities including: health checks at local Rescue Squads, Check-out Day at grocery stores where people learn how much of the cost of their purchases went to the farmer and booths to promote Farm Bureau at local events. She attended Farm Bureau’s Legislative Day at the General Assembly representing all of Southside Virginia. She and her husband, Richard, traveled many miles attending local, state and national Farm Bureau meetings. They were known to many as Mr. & Mrs. Farm Bureau for all that they did to support and promote the organization.

She attended Salem United Methodist Church for over 70 years where she served in various roles including Sunday School Teacher, Administrative Board Member, Communion Stewardess and President of the United Methodist Women.

To order memorial trees or send flowers to the family in memory of Reba Inge, please visit our flower store.