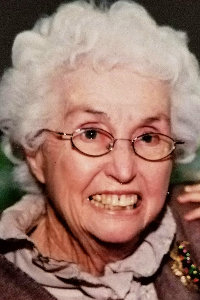 Iris Jones Lehman, age 95, formerly of Moss Hill, NC, passed on Wednesday, March 15, 2017. She was born in Moss Hill, NC, May 1921 to the late L. P. and Nita Rouse Jones. She is predeceased by four brothers, five sisters and one grandson, Larry A. Lehman, Jr.

She was a current member of Farmville Baptist Church, Farmville, VA. Iris served in the Army Air Corp during WWII.

A private graveside service will be held at Westview Cemetery in Kinston, NC later this month. In lieu of flowers, please consider memorial contributions to the Farmville Baptist Church, 132 N. Main St., Farmville, VA 23901 or Union Baptist Church, 6504 NC-55, Kinston, NC 28504. Online condolences may be expressed at www.newcomballgoodfh.com. Newcomb Allgood Funeral Home in Chase City is in charge of the arrangements.

To order memorial trees or send flowers to the family in memory of Iris Lehman, please visit our flower store.