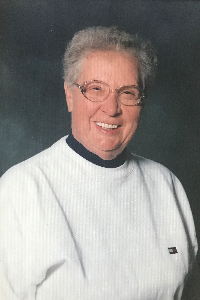 Carrie F. Overbay, “ Kay” or “Freedie,” as she was called by family and friends, age 81 of Skipwith, VA and most recently of Fort Walton Beach, FL where she was living in a loving and caring Assisted Living Facility. Carrie went to join other family members on Friday, June 2, 2017. Carrie was born on December 30, 1935 in Marion, VA and was the first born to James H. and Mable Thomas Overbay.

She was raised in Marion, VA and graduated from Marion High. In her early years, she worked for City Drug and later she made donuts for the corner restaurant. After High school, she attended Marion College. Deciding to leave Marion, she went to work for the FBI in Washington, but later moved to Richmond, VA where she began working for Allied Chemical as a Lead Shift Supervisor, from which she later retired. She was a respected supervisor who took care of her subordinates and they watched out and took care of her. After living and working in Richmond, VA, she later moved to Skipwith, VA where she built a home and enjoyed having a vegetable garden and the peace and quiet of a country life and neighborly friends. She always had a love for animals and seemed to always find a few in need of a good loving home.

Graveside services will be held at Woodland Cemetery, Chase City, VA on Thursday, June 8th at 11:30 a.m. Friends may call from 10:00 a.m. – 11:00 a.m. at Newcomb Allgood Funeral Home prior to the graveside service. Online condolences may be expressed at www.newcomballgoodfh.com. Newcomb Allgood Funeral Home will be handling the local arrangements.

To order memorial trees or send flowers to the family in memory of Carrie Overbay, please visit our flower store.