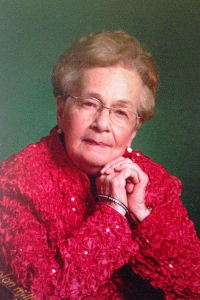 Edith Mae Allgood Nicholson, age 90, of Chase City, VA, passed away Sunday, July 22, 2018. She was born March 19, 1928 in Mecklenburg County, VA and was the daughter of the late Howard Sidney Allgood and the late Lena Griffin Allgood.

Edith was a loving wife, mother, homemaker, and seamstress. She grew up in the Jeffries Community where she attended Jeffries Baptist Church. Edith was a faithful member of First Baptist Church in Chase City and was a member of the Jenny Hall Circle, the Ruth Sunday School Class, and served on the Hostess Committee. She contributed tirelessly to the life of First Baptist Church including accepting the responsibility of becoming the Director of the Nursery where she taught for 40 years. She also received numerous perfect attendance pins for being present each Sunday for Sunday School. When Edith was 67 years old, she became one of the first citizens from Chase City to earn her GED from Southside Virginia Community College in Keysville.

To order memorial trees or send flowers to the family in memory of Edith Nicholson, please visit our flower store.