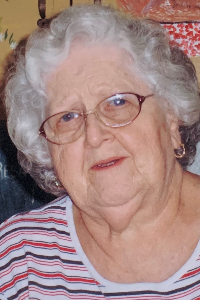 Ellie Jeanette “Polly” Bruce, age 85, of Chase City, VA, passed away Wednesday, January 23, 2019. She was born March 16, 1933 in Charlotte County, VA and was the daughter of the late Clyde Compton and Bertha Ward Wallace.

She was a member of the American Legion Ladies Auxiliary for 25 years. Polly was a loving, devoted mother and grandmother. She was a wonderful cook and anyone that came to her home never left hungry.

Funeral services will be held at 12 p.m., Saturday, January 26, 2019 at the Newcomb Allgood Funeral Home Chapel. Visitation will begin one hour prior to the service. Entombment will be private.

To order memorial trees or send flowers to the family in memory of Polly Bruce, please visit our flower store.