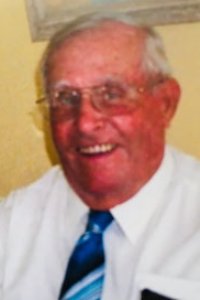 Gordon Thea Clarke, age 91, of Victoria, VA passed away Monday, February 25, 2019. He was the son of the late Stuart and Annie Crafton Clark of Rehoboth, VA.

Gordon's wife of 25 years, Naomi Abernathy Clarke, passed away just one day after him.

He was a United States Army Veteran of World War II and Korea and a proud member of Victoria VFW Post 9954. He was a member of Central Baptist Church and former Chairman of the Board of Deacons. He retired from Fort Pickett, VA in 1991 as a Planner and Estimator with the Department of Engineering and Housing. He also owned and operated G.T. Clarke and Son Refrigeration. He enjoyed farming, gardening, going to auctions and looking for one more tractor for his collection.

Funeral Services will be held at 2 p.m., Friday, March 1, 2019 at Central Baptist Church, 57 Merryman Drive, Victoria, VA. Interment will follow in Lakeview Cemetery in Victoria. The family will receive friends one hour prior to the service at the church. Newcomb Allgood Funeral Home of Chase City, VA is serving the family.

To order memorial trees or send flowers to the family in memory of Gordon Clarke, please visit our flower store.