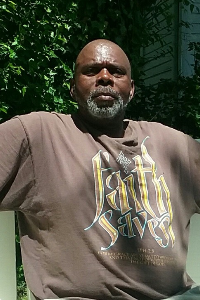 James Daniel “Jimmy” Leigh, age 56, of Danville, Va formerly of Chase City, Va entered into rest on Wednesday, July 3, 2019. He was born October 10, 1962 in South Hill, Va and was the son of the late Arthur Burchett Leigh and the late Inez Marie Smith Leigh.

He was preceded in death by his brother, Arthur Leigh, Jr.

Jimmy was a very loving father and brother and always supported his son, Ollie. He was an avid Redskins Fan. Jimmy loved life, he was easy going, and he had a lot of fun. He was a social butterfly and had a lot of friends. He was always lending a helping hand to everyone in his community and was known as the neighborhood taxi driver. Jimmy was a jack of all trades and enjoyed working on cars and fixing anything that needed to be fixed.

Online condolences may be expressed to the family at www.newcomballgoodfh.com. Newcomb Allgood Funeral Home in Chase City, Va will be handling the arrangements.

To order memorial trees or send flowers to the family in memory of James Leigh, please visit our flower store.