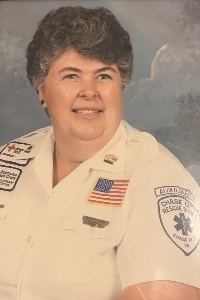 She was a member of Liberty Baptist Church in Skipwith, Virginia. Peggy was a former dedicated member of the Chase City Rescue Squad Auxiliary and also taught numerous EMT courses.

She is preceded in death by her brothers, Allen Carter, William Carter, and Charles Carter.

Peggy is survived by her brother, Marshall Carter of Chase City and numerous nieces and nephews.

In lieu of flowers, please consider memorial contributions to the Chase City Rescue Squad, P.O. Box 81, Chase City, VA 23924. Online condolences may be expressed to the family at www.newcomballgoodfh.com. Newcomb Allgood Funeral Home in Chase City, VA will be handling the arrangements.

To order memorial trees or send flowers to the family in memory of Peggy Carter, please visit our flower store.