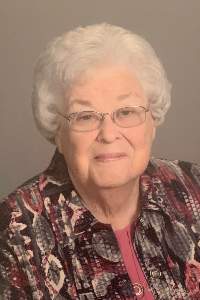 Marion Davis Jones, age 83, of Skipwith, Virginia, passed away Thursday, December 26, 2019. She was born January 27, 1936 in Chase City, Virginia and was the daughter of the late William Alex Davis and the late Charlotte Wells Davis.

She was a member of Concord Baptist Church and a member of the Chase City Chapter of the Eastern Star. She retired from Bluestone Middle School as a Cafeteria Worker.

She was preceded in death by her husband, Sammy Ray Jones and daughter, Kathy Jones Warner.

Visitation will be held Saturday, December 28, 2019 from 7 until 8:30 p.m. at Newcomb Allgood Funeral Home. Funeral services will be held Sunday, December 29, 2019 at 2 p.m. at Concord Baptist Church, 11650 Highway Forty Seven, Chase City, Virginia 23924. Interment will follow in the church cemetery. Following the service, a reception will be held in the Church Fellowship Hall.

To order memorial trees or send flowers to the family in memory of Marion Jones, please visit our flower store.