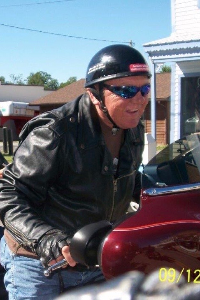 Jack was an avid hunter and loved to ride motorcycles.

He is the son of the late Roy and Barbara Burns. He is preceded in death by his sister, Sandra Shearin, his nephew, Wayne Grey Shearin; and his brothers-in-law, Reggie Bolick and Terry Bolick.

A funeral service will be held 2:00 p.m. Sunday, January 19, 2020 at the Newcomb Allgood Funeral Home Chapel. The family will receive friends following the service at the funeral home.

In lieu of flowers, memorial contributions may be made to the SPCA. Online condolences may be expressed to the family at www.newcomballgoodfh.com. Newcomb Allgood Funeral Home in Chase City, VA will be handling the arrangements.

To order memorial trees or send flowers to the family in memory of Jack Burns, please visit our flower store.