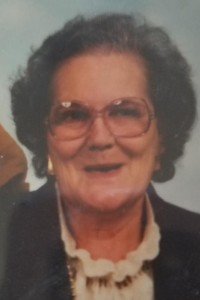 She was a member of the Kingdom Hall of Jehovah’s Witnesses.

She was preceded in death by her husbands, Hugh Hamlett and Tom Anderson; two sons, David Allen Hamlett and Harold Watkins Hamlett; three brothers and one sister.

To order memorial trees or send flowers to the family in memory of Alma Hamlett Anderson, please visit our flower store.