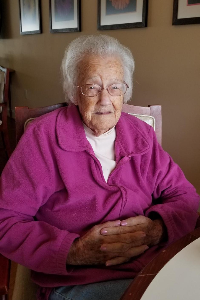 Marie Allgood Tillotson Huneycutt, age 94, of Buffalo Junction, Virginia passed away Sunday, September 27, 2020. She was born April 15, 1926 in Mecklenburg County, Virginia and was the daughter of the late Howard Sydney Allgood and the late Lena Griffin Allgood.

She attended Jeffress Baptist Church in Clarksville, Virginia and was a member of Buffalo Baptist Tabernacle Church in Buffalo Junction, Virginia. She retired from Burlington Industries.

In addition to her parents, she was preceded in death by her husbands, Harrison Tillotson and Earl Huneycutt; two brothers, Ryland Allgood and Meredith Allgood; and four sisters, Edith Nicholson, Doris Mathis, Christine Matthews, and Sue Yancey.

To order memorial trees or send flowers to the family in memory of Marie Allgood Tillotson Huneycutt, please visit our flower store.