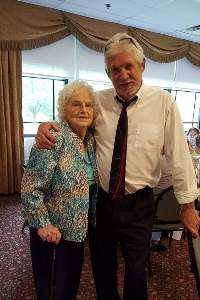 Panzie Parham Pruett, age 91, of Virginia Beach, VA formerly of Chase City, VA passed away on Thursday, January 14, 2021. She was born on December 10, 1929 in Raleigh, NC and was the daughter of the late Louis Daniel Parham, Sr. and the late Miriam Reaves Parham.

Panzie was a 1947 graduate of Randolph-Henry High School, a 1962 graduate of Longwood University and a beloved teacher at Chase City Elementary School for 27 years. She was a member of Friendship United Methodist Church in Chase City. She was a seamstress and enjoyed knitting and making clothes. She loved flowers and was an avid reader.

In addition to her parents, she was preceded in death by her husband, Jack Pruett, Jr.; two brothers, Louis D. Parham, Jr. and William J. Parham; and her sister, Mary E. Parham Lenhart.

Funeral services will be held on Sunday, January 17, 2021 at 2 p.m. at Friendship United Methodist Church in Chase City, VA with Reverend Jim Fry officiating. The family will receive friends and family following the service in the church. Interment will be private.

In lieu of flowers, please consider memorial contributions in Panzie’s memory to Friendship United Methodist Church, Chase City, VA or to your local SPCA. Online condolences may be expressed at www.newcomballgoodfh.com. Newcomb Allgood Funeral Home in Chase City, VA will be handling the arrangements.

To order memorial trees or send flowers to the family in memory of Panzie Pruett, please visit our flower store.