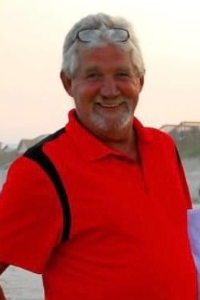 He was preceded in death by his parents, John Henry Lenhart and Mary Elizabeth Parham Lenhart and his brother, David William Lenhart.

During his life, Johny had different jobs, but his favorite time was spent as proprietor of The Corner Grocery directly across from Lunenburg Court House. His love of this community extended to each person who stepped through the door of that old time country store. He loved working with Little League Baseball and will be remembered by the field bearing his name. Another joy was his love for baseball cards, which occupied his time during retirement. He loved auctions where he could find unique odds and ends to sell. During his years at the beach, he spent time walking the shores and collecting shark teeth and sea glass. Another passion in his life was music. He traveled with Susan many times as far away as Maine to hear Chris Hillman and Herb Pendersen. Other tunes that provided a musical score for his life were grounded in blues, Byrds, and the Flying Burrito Brothers.

Without question, Johny treasured his family above all else, and he was quick with a joke and generous with his Cajun cooking. He had a way of sharing his love in a special way with each one. No one could measure up to the legend of “Pappy” and so many called him by that name, extending far beyond his family.

Johny leaves behind many friends, cousins, and other family members to cherish his memory.

A Celebration of Life will be held at 2 p.m., Saturday, June 19, 2021 at the Newcomb Allgood Funeral Home Chapel with Reverend Herman Newcomb officiating. Visitation will begin one hour prior to the service.

To order memorial trees or send flowers to the family in memory of Johny Lenhart, please visit our flower store.