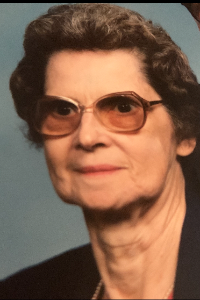 She was born February 15, 1924 in Mecklenburg County, Virginia and was the daughter of the late Gordon Piercey and Helen Wells Piercey.

She was a member of First Baptist Church in Chase City and retired from Craddock-Terry Shoe Factory.

In addition to her parents, she was preceded in death by her husband, Elmer Jackson Lewis; two brothers, Thomas Piercey and James Piercey; and a sister, Iris Seymore.

A graveside service will be held at 2 p.m., Sunday, March 7, 2021 at the Woodland Mausoleum in Chase City with Reverend Thomas Cribb officiating.

In lieu of flowers, please consider memorial contributions in Audrey’s memory to the Mecklenburg County Cancer Association (MCCA), P.O. Box 311, Chase City, VA 23924 or online at www.mecklenburgcancer.org. Online condolences may be expressed to the family at www.newcomballgoodfh.com. Newcomb Allgood Funeral Home in Chase City will be handling the arrangements.

To order memorial trees or send flowers to the family in memory of Audrey Lewis, please visit our flower store.