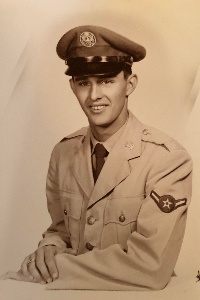 Robert Angus Black, 78 of Chase City, Virginia passed away on Friday, May 7, 2021, surrounded by his family.

Robert was born to parents Jurney Franklin and Effie Mae Black, on August 25, 1942, in Farmville, Virginia.

He graduated from Bluestone High School and served four years in the U.S. Air Force (Jan. 8 1960 – Dec. 17 1963) where he got his degree in telecommunications. After proudly serving his country, he started his next chapter of his life and worked for AT&T for over 35 years in Florida with his loving family. In the mid 80’s, he followed his heart and purchased farming land back in Virginia where his passion for agriculture and nature flourished.

Robert was known for his love for nature, God, and had a passion for learning anything he desired. He was a very spirited and creative man while also being pure of heart. Robert instilled the integrity and honesty of a Southern Gentleman into all of his children. He was a proud father and loved by his family very much.

The Graveside Service will be held on Monday, May 10, 2021, at 2pm at the Bethel Baptist Church Cemetery located at 9040 Trottinridge Road, Chase City , Virginia 23924.

In lieu of sending flowers, Robert’s wishes are to make donations to the Department of Veterans. Online condolences may be expressed to the family at www.newcomballgoodfh.com. Newcomb Allgood Funeral Home in Chase City, VA will be handling the arrangements.

To order memorial trees or send flowers to the family in memory of Robert Black, please visit our flower store.