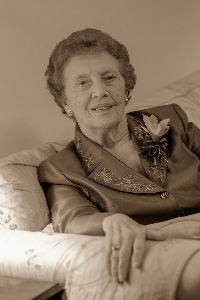 Nellie Mae Carter Allgood, age 95, of Chase City, Virginia passed away Monday, October 18, 2021. She was born August 26, 1926 in Mecklenburg County, Virginia and was the daughter of the late Joseph Henry Carter and the late Mary Allgood Carter.

In addition to her parents, she was preceded in death by her husband, Lewis Allgood and her brother, Henry “Edward” Carter.

Nellie was a 1944 graduate of Dan River High School in Danville; she graduated sixth in her class. She was a member of Easter’s United Methodist Church. She loved flowers, her family and friends, and God.

A graveside service will be held at 3 p.m., Thursday, October 21, 2021 at Easter’s United Methodist Church Cemetery. The family will receive family and friends following the service for a reception at Easter’s Hunt Club.

To order memorial trees or send flowers to the family in memory of Nellie Allgood, please visit our flower store.