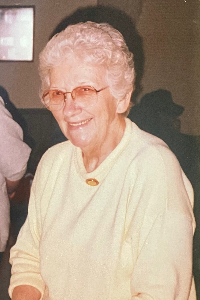 Evelyn Royster Jones, age 98, of Chase City, Virginia passed away Thursday, November 11, 2021. She was born February 22, 1923 in Sudan, Virginia and was the daughter of the late William Royster and the late Lonie Sizemore Royster.

She was the oldest member of First Baptist Church in Chase City.

In addition to her parents, she was preceded in death by her husband, Chrispen Leo Jones; her daughter, Jackie Kizer; brother, Thomas Royster; and sisters, Marguerite Muse and Edna Poythress.

Funeral services will be held at 2 p.m., Sunday, November 14, 2021 at the Newcomb Allgood Funeral Home Chapel. Entombment will follow in the Woodland Mausoleum in Chase City. The family will receive family and friends one hour prior to the service at the funeral home.

To order memorial trees or send flowers to the family in memory of Evelyn Jones, please visit our flower store.