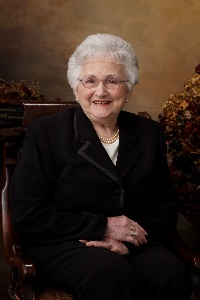 Frances McGee Seamans, passed away on Friday, January 7, 2022, at the age of 91. Born on November 16, 1930 in Mecklenburg County, Virginia she was the daughter of the late Clarence and Amber Smith McGee. She was a graduate from Chase City High School in 1946 and married Raymond James Seamans on June 16, 1948.

Frances was a pillar to the family dairy farm, she was a homemaker, had a tax preparation service, and later after retiring from the dairy business she was a secretary at Chase City Elementary School. She was a dedicated member of Concord Baptist Church where she served as a Sunday School teacher, Deacon, and Historian.

She was preceded in death by her parents; her husband of 46 years, Raymond Seamans; and siblings; Robert McGee, Hubert McGee, Madeline Hurst, and Clarence “Buck” McGee.

Graveside funeral services will be held at 2:00 P.M. on Monday, January 10, 2022 at Concord Baptist Church Cemetery with Pastor Woody Moore and Pastor Joe McDowell officiating. The family will receive family and friends before the service beginning at 1:00 P.M. in the church fellowship hall. Due to COVID, the family has requested everyone wear a mask while attending the visitation and the service. The family will not be receiving visitors at the home and requests visiting them during visitation hour on Monday.

In lieu of flowers, the family asks that you consider memorials in Frances’ memory to Concord Baptist Church, 11650 Hwy 47, Chase City, Virginia. Online condolences may be expressed to the family at www.newcomballgoodfh.com.

Newcomb Allgood Funeral Home in Chase City will be handling the arrangements.

To order memorial trees or send flowers to the family in memory of Frances Seamans, please visit our flower store.