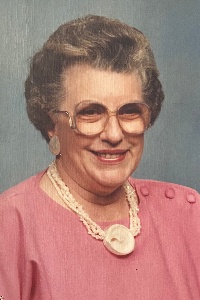 Dorothy Robertson Clark, “Dot,” age 94, of Chase City, Virginia passed away Sunday, February 6, 2022. She was born on May 21, 1927 and was the daughter of the late Philip M. Robertson and Grace Crute Robertson.

In addition to her parents, she was preceded in death by her husbands, W. Wilson Bratton and Garnett E. Clark; her brothers, Major Raymond M. Robertson and Gordon L. Robertson; and her step-son, William “Bill” Clark, II.

Dorothy was a faithful life time member of First Baptist Church and served in the Elizabeth Hale Circle and Women’s Missionary Union, WMU, for over 50 years. She retired from banking after 35 years of service and she loved her monthly luncheons with the “Central Fidelity Bank Retirees.” Dorothy loved antiques, her church and her family.

The family would like to extend a very special thank you to Christine B. Jackson for being such a special friend and devoted caregiver to Dorothy.

Graveside services will be conducted on Wednesday, February 9, 2022 at 2 p.m. at Woodland Cemetery in Chase City. Visitation will begin one hour prior to the service at the gravesite.

In lieu of flowers, please consider donations to the Chase City Volunteer Fire Department, P.O. Box 595, Chase City, VA 23924. Online condolences may be expressed to the family at www.newcomballgoodfh.com. Newcomb Allgood Funeral Home in Chase City will be handling the arrangements.

To order memorial trees or send flowers to the family in memory of Dorothy Clark, please visit our flower store.