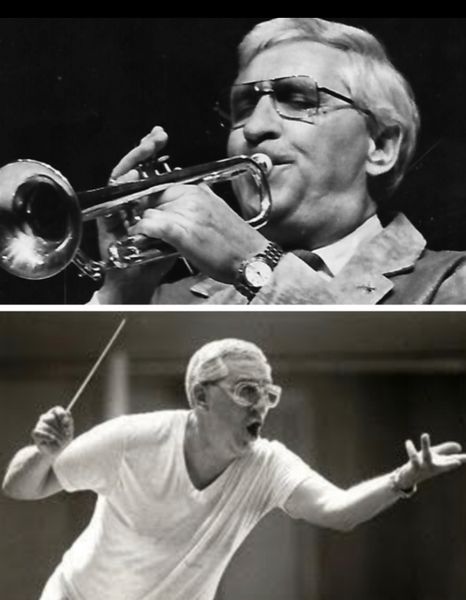 Hand delivered by a local florist

He received his bachelor’s degree from Concord (WVA) College now University, his master’s degree from the University of North Carolina at Chapel Hill and his doctorate from New York University. He studied trumpet under Dr. Charles Colin and Dr. Renold O. Schilke.  White served in the U. S. Air Force Band, Units 725 and 776, and directed the Air Force Jazz Ensemble.

Dr. White was a musician’s musician. He had a singular and amazing ability to motivate and inspire his students and every musician he met to perform beyond even their own highest expectations, always with “a little pepper!” in a booming voice that many claimed could be heard three football fields distant. Some say he formed his first band while in the eighth grade in Keystone, WV. Dr. White mentored thousands of his students and fellow musicians as director at Lebanon (VA) High School (1950-’54), George Wythe (VA) High School (1954-’59), Cary (NC) High school (1959-’62--also founder of Cary Band Day),Elon (NC) College, now University, (1962- ‘86), Wytheville (VA) Community college in his semi-retired years and finally as the founder/conductor of the Wytheville (VA) Community Band.  He was truly "THE Music Man” wherever he conducted, beloved by generations of high school/college students as well as the community citizensanyplace where he and JoAnn lived.

Throughout his career, White arranged music for numerous musical groups, always in demand as an adjudicator and clinician, judging marching bands and music festivals throughout the Southeast. His compositionthe mighty and lush “The Cool Fanfare,” opened many a half time show for Elon’s “Showband of the Carolinas” and “The Chaser” became the stock closer for every Emanonsshow. He was a member of the College Band Directors Association, the National Band Association, and the American Federation of Musicians, New York City, Local 802. Well known in the music world, White was well-acquainted with entertainment giants of the instrumental music, jazz and performance community including Vincent Bach, Maynard Ferguson, Dizzy Gillespie, Manny Klein, Wynton Marsalis, Donald O’Connor, Doc Severinsen and Clark Terry.

Famed for his energy and frequent admonitions such as “Schlopp!,” ‘”Crazy!, “Umbriago,” “Exaggerate!” and last but not least, “…Take it at H….and go to L!,” White was personally recruited to join the Elon College music faculty in 1962 by then President Dr. J. Earl Danieley. Under White’s baton, “The Showband of the Carolinas” quickly achieved a wide reputation for innovative and entertaining football half time shows featuring such creations as the ‘Flying E Formation,’ the snappy ‘Thank You Maneuver’and the compelling ‘press-roll’ cadence. In one instance,the “Showband” was credited with winning a game with then Lenior Rhyne College.

Dr. White organized and directed, with the assistance of Dr. David Bragg, the internationally-known ‘Emanons of Elon’ jazz ensemble and spearheaded 23 annual tours of east coast high schools in addition to military installations from Puerto Rico to Germany. In 1971 The Emanons were named an “All American Entertainment Troupe” by the United States Armed Forces. N. C. Governor Robert Scott designated The Emanons as “Good Will Ambassadors forthe State of North Carolina in 1972. Two of the ensemble’s international tours, sanctioned by the U. S. Department of State, featured the Emanons as headliners at the Grand Ball of Luxembourg playing for the Duke and Dutchess of Luxembourg.

An innovative educator, dedicated mentor and tireless performer, White was recognized as Elon’s Outstanding Professor in 1968 and 1969. His watchwords were “Musicians must not only perform music, they must learn to entertain.” Now a professional music educator, a mentee of Dr. White recently reflected on his advice to her “…whatever happens with your trumpet playing career, please promise me you’ll never lose your joy!” Upon White’s retirement in 1986, he was named Professor of Music Emeritus. In 1995, he was awarded the prestigious Elon University Medallion.  In 2012 he was named Band Director Emeritus.

A public “Celebration of Life” will be held June 18, 2022 in the Snyder Auditorium on the campus of Wytheville Community College, Wytheville, VA, beginning at 2 PM. There will be a program with the opportunity for attendees to share memories, recollections and amusing stories surrounding the life of Dr. White with a reception following.Friends and students may post their tributes to Dr. White at www.newcomballgoodfh.com.

Plans are underway to seek donations for an appropriate long term memorial honoring Dr. White and will be announced at the June celebration service.

To order memorial trees or send flowers to the family in memory of Dr. Jack O. White, please visit our flower store.